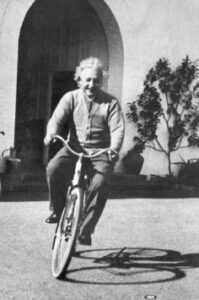 In a nutshell, physics is a branch of natural science that investigates the basic laws of nature, as are manifested in every system that can be observed / measured – either on earth or in space.
Thus, we may want to start by understanding what is “natural science”, or “science” in general.
The world we live in is complex. There are many questions that interest us and that we would want to find answers to. These questions are related to all aspects of life – from the very basic, everyday questions to the very big and philosophical ones. For example, one question that bothers nearly all of us, is our inability to know the future.

In the course of history, mankind has invented various methods to try and answer the various questions that people encounter. One very popular way which is in broad use for many generations (until today) and in many different cultures is religion: the faith in something bigger than us (“god”, or in some cultures multiple gods), whose will determines our future. Thus, according to this approach, our way of influencing our future is by pleasing god, in hope of a future reward.

Science provides a different approach. In principle, scientists limit themselves considerably: scientists only deal with things that can be measured. Thus, there are many questions which scientists do not attempt to answer at all. For example, a scientist is interested in discovering a law of nature, but the question of why the law of nature takes one form and not another, is outside the realm of science. Similarly, in science there is no “good” or “bad”; scientists do not attempt to judge their findings in a moral way. This is a key to science: as opposed to some other methods (such as religion) science does not attempt to answer all the questions. This humble approach is central to the science, and is a major part of what makes it so powerful.

Science is divided into two parts. The first, and most important one, is the scientific experiment, or observations. In principle, everything we do – and by “we” I mean EVERYONE – can be considered as a scientific experiment (under the appropriate conditions!). Thus, the question of WHO conducts the experiment – young or old, wise or common man, English speaking or Chinese speaking, etc. – is completely irrelevant. There is one key difference between a scientific experiment and anything else: a scientific experiment must be REPRODUCIBLE. In other words, in order for an experiment to be considered as scientific, two different people (regardless who they are!) that are doing the same thing must obtain the same result. Thus, there is no need for any “special powers”, or “special wisdom” – truly, everybody can conduct a scientific experiment. Since, in practice, it is often difficult to isolate the influence of changing conditions that may affect the outcome of an experiment, scientists (and physicists as part of that), prefer to work in laboratories, where the conditions can be much better controlled. Sometimes, this is impossible (e.g., astronomers cannot take stars into their lab), but science found solution to that problem too, by using mathematical tools such as statistics.

A great classical example is Isaac Newton’s theory of gravity. Newton wrote an extremely simple universal law of gravity, according to which every two massive bodies in the universe attract each other, by applying a force that is directly proportional to the product of each of the masses, and inversely proportional to the square of the distance between them. Newton based his theory on many different scientific experiments, mainly observations of bodies falling down on earth (the famous story about the apple falling down on Newton’s head), as well as careful measurements of trajectories of planets, made by the astronomer Johannes Kepler. The theory is truly amazing: it gave correct predictions to inumerous experiments. Perhaps the ultimate proof took place nearly 250 years after Newton’s death, when his theory was used successfully to make the calculations needed to put man on the moon.

Newton’s theory, though, is wrong (better say: incomplete). It gave excellent predictions to all the experiments that were conducted for 200 years after it was proposed. However, in 1887, about 200 years after it was introduced, long after Newton himself died, two people – Albert Michelson and Edward Morley have managed to conduct a scientific experiment whose outcome contradicted the prediction of Newtonian gravity. The theory was thus doomed to be wrong, and needed to be replaced with a better one. It took the efforts of another genius – Albert Einstein – who replaced Newtonian gravity with a different theory of gravity, known as general relativity. As is to be expected, general relativity gives very similar predictions to Newtonian gravity in very many cases, and in particular in (nearly) all experiments that can be carried out here on earth – though there are a few cases in which the two theories give different predictions. All scientific experiments carried out to date show that in these cases, Einstein’s theory is the correct one.

Thus, by abandoning the idea of “absolute truth”, and accepting the humble approach that our knowledge is limited, as well as the democratic approach according to which everyone can conduct a scientific experiment or raise a theoretical idea, science – and physics, being in the heart of it – managed to progress mankind in an un-imaginary way. By admitting our ignorance, mankind managed to gain enormous powers. Just think of how life looked like about 100 years ago – a tiny fraction of history: life without cars, airplanes, television, computers, radio, electricity, plastic, telephones, etc…